The image is of the Long Man of Wilmington, a chalk picture made upon the Sussex Downs.Sometimes called the Guardian of the Downs, mystery surrounds his origin. Once believed to be drawn by William Burrell from a record of 1766, this was disproved when an earlier drawing was discovered, made in 1710 by surveyor John Rowley.

Thus debate continues, some are sure that he is prehistoric, others think a monk at the nearby priory made him between the 11th and 15th centuries. Yet others believe the Long Man is depicted in Roman coins from the fourth century.
He is certainly difficult to ignore, being 235 feet high on the steep slopes of Windowver Hill.
As anything from antiquity he has been the subject of many theories. The latest idea from the experts is that he was originally just a shadow or indentaion in the grass rather than a solid line.

Like this image printed on a T Shirt?
They believe he once had facial features, and that his head was once the shape of distinctive helmet.This suggests he may have represented a warrior, or a war god.
Over time steps were taken to preserve him, as by the 19th century he was only visible in certain conditions, such as when there was a light fall of snow. In 1874 his outline was marked by yellow bricks and it is said his feet were re positioned!
Luckily he has survived and reminds us that in ancient times a chalk hill figure could indicate much to the traveler. It denoted a territory, it gave the message that there was a community or tribe in that area, and they had fighting men capable of defending their homeland! There may have been more to his story, but we must be content to admire his elegant pose and recognize that there was a purpose for his his presence on the Sussex Downs.

The Sorcerer is the name that has been given to this iconic painting, discovered on a cave wall in Le Trois Freres in France. This piece of art, dating from the Stone Age depicts a male shaman wearing a stag mask and costume.

Experts have placed the drawing to the end of the Ice Age within a period between 15,000 to 10,000 BC.
The Stag was clearly venerated by our ancestors, not just for its meat, but as a symbol suggesting masculine force, a powerful energy that exudes life energy, virility and fertility.
Thus the sorcerer’s dance portrays raw force and connection with humankind’s most ancient beliefs. Only a powerful shaman and elder would be entitled to wear such costume, using it as part of a ritual to enter the spiritual aspect of the natural world of the Stag and internalize aspects of this powerful animal’s character.

Thus the portrayal of this Shaman tells us that he aspired to, or was, the equivalent in his community: a proven, fertile father, a noble hunter, a defender of his herd – and in tune with the life and world of the forest. As the king of the forest the Stag also represents hierarchy, and a Shaman wearing this costume would be acting out leadership – his authority made the first laws.
In Tarot this image corresponds with the Emperor.
This ancient drawing instantly connects us to Shamanism, spirituality, and the dance rituals of our ancient forefathers and gives us insight into their world. It reminds us that humans have always had a fascination for the spiritual, and a respect for nature.

The image depicts the chalk drawing of the White Horse of Uffington, which sits on a steep escarpment on the Berkshire Downs, within the Vale of the White Horse in Oxfordshire. A Late Bronze Age hillfort sits above it (dating from the 7th century BC) and below is the Ridgeway, a long distant track from Neolithic times. Not far away is Wayland Smithy, a Neolithic burial mound.
The earliest reference to the Horse dates from 1070AD when it was mentioned in a charter belonging to nearby Abingdon Abbey. 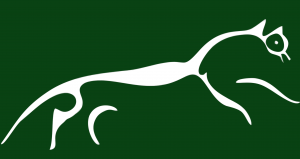 Celtic coins from the first century BC depict horses very much in this style, but recent dating using modern techniques, may indicate that the figure is older than first thought. In 1995 Optically Stimulated Luminescence (OSL) testing was carried out on the soil which dated the horse to between 1400 and 600 BC – this puts the White Horse back to the Late Bronze Age or Early Iron Age, and suggests a relationship with the people who lived in the Hill Fort above.

The chalk figure is 110 meters long and 40 meters high and is best seen from the air. Why is a mystery, but there are suggestions that it is a Tribal emblem or a carving created to perform religious rituals, in which case perhaps it was made to be seen by sky deities. If tied to ancient religions, the first Goddess that comes to mind is Epona, a Celtic Mother Goddess, who protected horses and symbolized fertility. She was adopted by the Roman Cavalry and was the only Celtic Goddess recognized by the Romans. This is special enough until you realize that the latest dating for the White Horse at Uffington predates the Celts by six centuries!

However, it is known that horses were of great importance during the Bronze and Iron Ages, being depicted on jewellery and coins. Thus the horse at Uffington may represent the White Horse ridden by the goddess Rhiannon – a native British horse goddess, later described in Welsh mythology as Queen of the Otherwold. And, as with many survivors from the ancient world, there are other theories – even that the horse began life as a dragon!

The White Horse is an emblem of ancient landscapes, imbued with mystery and beauty. It gallops into our times from a world of mysterious rituals, where ancient springs and groves once created magical tales, and a dragon dwelt in the hill. The White Horse symbolizes journeys, made centuries ago along the Ridgeway, where a man could look up and know his way, to the present day when the journey is to the hill itself, so one can sit above the horses eye and survey the unique landscape and imagine the ritual processions from Dragon Hill around the Horses Manger.
The antiquity of this chalk figure and its purpose may never be fully understood, but this piece of ancient art owes its very survival to the local people who came together every Midsummer and ‘scoured the chalk’. Thus, in today’s world, it can also claim to symbolize co-operation and the value of community.